To assist with planning, please register to attend in-person or virtually.

As you drive into Champaign County, you may have seen green highway signs that read Birthplace of the Tuskegee Airmen—the all-Black aviators in WW II.  The 99th Pursuit Squadron, which later became known as the Tuskegee Airmen, was formed at Chanute Airfield in Rantoul in 1941.

To showcase the remarkable work and skills of these pilots, the University of Illinois Department of Aerospace Engineering and student group Minorities in Aerospace will host a free screening of the 60-minute Lucasfilm documentary "Double Victory: Tuskegee Airmen at War,” followed by a panel discussion.  The Department of African American Studies at UIUC is co-sponsoring the event.

The film and discussion will be Friday, March 25 from 6 p.m. to 8:30 p.m. in the National Center for Supercomputing Applications at 1205 W. Clark St. in Urbana. 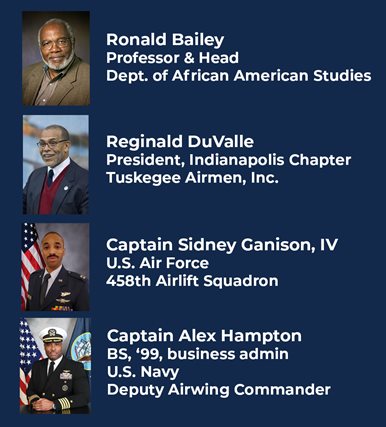 The title of the film alludes to victory over fascism in the war and racism at home. The success of the Tuskegee Airmen at flying and fighting with a variety of combat aircraft in World War II paved the way for racial integration of the armed forces.

This event will follow all campus Covid-19 guidelines in place at the time of the event.  https://covid19.illinois.edu/spring-2022-guidelines/