On February 6, 2018, Space X Falcon Heavy launched from Kennedy Space Center in Florida. Rocket launches are always exiting. But what happened eight minutes later brought sustained cheering, yelling, clapping, and shouts of “Go, go, go” like an Olympic athlete about to set a record for weightlifting.

A few miles away, the same two Falcon 9 side boosters that went up, came down again on separate pads—not crashing, but straight and tall the two boosters landed. synchronized as if set to music.

This weekend, students will compete with their own model rockets as they attempt to land their own models vertically. Rather than launching, then landing, the model rockets, which resemble the SpaceX Falcon 9 first stage. It is carried aloft by a drone, released at a designated altitude, and after firing a small model rocket model, lands upright on the ground.

It’s part of the Department of Defense STEM education and outreach program for students in k-12 and college-level students. It is designed to generate interest in careers in space and increase the number of students pursuing degrees in aerospace engineering. This activity is just one of an array of educational resources to be employed in K-12 classrooms, increasing the awareness of STEM careers for individuals at a young age. 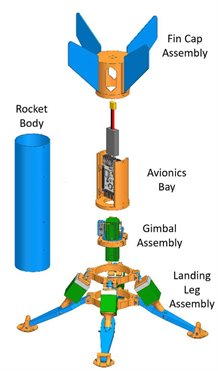 “Teams involved in this specific outreach project use a provided kit to construct a vertically landing rocket, carefully putting together subassemblies involving the flight computer, gimbal, and landing legs,”
said David Gable, a graduate student in the Dept. of Aerospace Engineering at the University of Illinois Urbana-Champaign. “Additionally, teams will use provided software analysis tools to calibrate the system, and design flight parameters which will lead to the best chance of successfully landing the rocket.”

The competition on Saturday, November 12 will begin at 8:30 a.m. at the Rantoul, Illinois Center for Transportation near the Rantoul airport.

The event will be livestreamed from the launch site.

An audience viewing area is also available for anyone who wishes to observe the competition first-hand.

Michael Harrigan, BS ’21 in Systems Engineering and Design and currently an AE graduate student is also on a UIUC team.

Michael Lembeck is the faculty sponsor; Heather Arnett is the STEM coordinator.